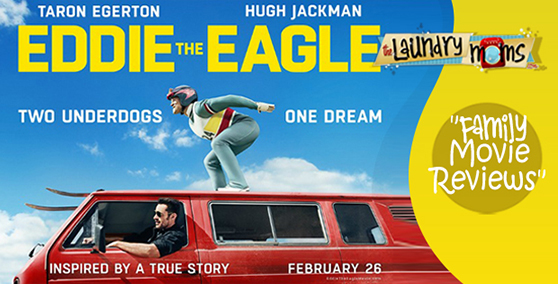 Eddie The Eagle is based on the true story of Michael Eddie Edwards, a young British ski jumper who competed in the 1988 Olympics, something no Brit had done since 1929. The story follows Eddie from the time he’s a little kid with dreams of going to the Olympics, through many assorted set-backs, including rejection from his peers and his father, who only saw him as a failure. After miraculously getting accepted, Eddie befriends Bronson Peary (Hugh Jackman), a former ski jumper who takes Eddie under his wing and trains him to achieve his dream. Christopher Walken, Jim Broadbent also star. The PG-13 rating is for mature themes that deal with rising above defeat, bullying, verbal abuse from a parent, a brief scene with partial nudity and scenes with smoking and drinking.

Because of these themes, I’m suggesting it more for mature teens to adults. There are moments of Eddie being rejected by friends, his father, the Olympic team, etc. that are hard to watch but there are also many feel-good moments with lots of humor. Jackman and Egerton are perfectly cast and create a compelling team that has the audience rooting for Eddie every step of the way. From the beginning of his numerous failed attempts, through his hospitalization and rehabilitation, to the pulse-pounding moments of the Olympics as Eddie prepares for his final jumps, Eddie the Eagle is a feel-good story of a man who achieved his dream through sheer will and determination, without winning anything but the respect for himself and the love of his country. Eddie became known not for what he accomplished in terms of wins, but for how he inspired others.