In celebration of Easter weekend there are several theatrical movies that will inspire you (and your family) with uplifting, spiritual messages, that celebrate all aspects of Christian faith. Check out my previous reviews of “Risen“, “The Young Messiah” and “Miracles from Heaven“, before heading to a theater this weekend.

For home viewing I recommend “The Passion of the Christ“, one of the best and most accurate depictions of what Jesus went through in his final hours. I had the privilege of working on “The Passion” with Mel Gibson and I can attest to the universal, life-changing impact it has made, on all who have seen it. 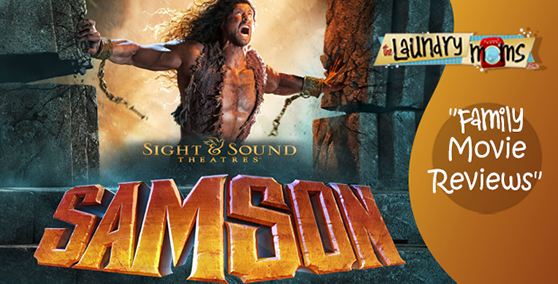 Sight & Sound Theaters is the largest faith-based, live theatre in the country – it’s the “Christian Broadway” that nearly a million people from around the world come to experience in both Lancaster, PA and Branson, MO!  I saw their production of the Bible’s original super hero Samson, in Lancaster County. The theater is beautiful, featuring more than 2000 seats, a ginormous 300 foot stage that partially wraps around the audience, incredible, large-scale sets and spectacular lighting and special effects, including the temple walls that DO fall down! This beloved biblical story is based on the bible with an amazing cast, beautiful music, live animals that stroll down the aisles and an ending that focuses on Jesus as the ultimate hero.

The founder of Sight and Sound, Glenn Eshelman, was a native of Lancaster County who began his passion for telling stories in the late 70’s. That vision continues today with his family overseeing the massive productions. I had a chance to interview the producers, Josh Enck and Matt Neff, and I can tell you, these productions are a labor of love with over 600 employees who give their heart, talents and faith, to each show.

I highly recommend this amazing entertainment experience! Make it a family destination and check out their website sight-sound.com to learn more about their productions, watch behind-the scenes videos and get information on both theaters, including the Moses show in Branson, MO.