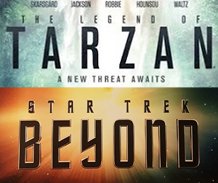 “The Legend of Tarzan and Star Trek Beyond”

With the holidays fast approaching, I’m going to recommend movie suggestions that are on DVD and streaming!

“The Legend of Tarzan” stars Alexander Skarsgard as John Clayton III, who resides in his late parent’s Victorian Greystoke manner in England with his wife Jane (Margot Robbie). It’s been a decade since The Lord of the jungle left Africa but he’s soon asked to return with George (Samuel L. Jackson) under the premise that he investigates the inhumane treatment of the African people for King Leopold. Tarzan and Jane are reunited with their beloved animals and old friends but soon, all are trapped in a deadly scheme led by Leon Rom (Christoph Waltz), to capture Tarzan and deliver him to an old enemy in exchange for diamonds.

amazing and realistic CGI animals, intense battles with an African tribe, incredible scenery and breathtaking scene of Tarzan swinging through the trees. I grew up loving Tarzan movies, so I was hoping to see some of those elements in this story and I wasn’t disappointed! There are wonderful details woven into the flashbacks, that show how Tarzan was raised by the apes, how he met Jane and why he returned to England. Jackson is a perfect addition playing Tarzan’s sidekick with humor and sarcasm. I enjoyed Skarsgard as a Tarzan who exudes a sexy strength of character as well as physic, along with Robbie’s Jane, who can hold her own when facing danger. Their loving relationship and happy ending made me wish for a sequel. Older fans who remember the original Tarzan movies, you will not be disappointed!

The PG-13 has lots of sci-fi action, ugly aliens and fight scenes, but….

nothing too graphic. I enjoyed the different parings of the crew, highlighting their personalities, witty dialogue and efforts to find and save their missing crew mates. I also enjoyed the tributes to Nimoy, with the younger Spock mourning the death of the Senior Spock and seeing an old photo of the original Star Trek cast (William Shatner, Nimoy, James Doohan, Walter Koenig, DeForest Kelley, Nichelle Nichols and George Takei). In fact, the closing credits include a tribute to Leonard Nimoy and Anton Yelchin (who died tragically almost a month before the film’s release.) For old and new fans, this is an action adventure mature pre-teens to adults will enjoy!