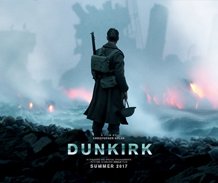 “Dunkirk” takes place in May 1940, when Germany advanced into France, trapping Allied troops on the beaches of Dunkirk. As the Germans repeatedly attempted to bomb the troops helplessly trapped on the beach, shallow waters prevented British destroyers from coming close to rescue them, so the call went out to civilians, with boats, to help ferry the soldiers to safety. In the end, 338,000 French, British, Belgian and Dutch soldiers were safely evacuated from the beaches of Dunkirk.

The PG-13 rating is for mild language and intense and realistic wartime violence but nothing too bloody or graphic. The story jumps around with…

…three different events taking place in one week, one day and one hour. The different perspectives are told through the eyes of a naval officer (Kenneth Branagh), a civilian boat captain (Mark Rylance), a traumatized officer (Cillian Murphy), two hero Air Force pilots (Tom Hardy and Jack Lowden), and a young British soldier (Fionn Whitehead). I couldn’t figure out why there were so many “20-somethings” (especially girls) wanting to see a WWII movie – then I realized it was the pop star Harry Styles (of the boy band One Direction), who plays a minor character but was the major attraction.

Although the writing, directing and casting is brilliant on Christopher Nolan’s part, along with the amazing visuals and intensely moving score by Hans Zimmer, Nolan’s time-twisting stylesometimes lacks clarity and might prove confusing for children under 12. The overall miraculous message of “Dunkirk” is the bravery, courage and teamwork that overcame Germany’s misjudgment and victoriously changed WWII history!