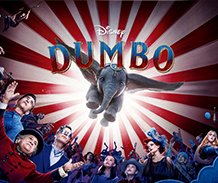 DUMBO is a live-action re-imagining of the 1941 Disney animated classic, about a baby elephant with oversized ears that help him to fly. Dumbo is born in a circus owned by Max Medici (Danny DeVito). Soon after, Medici sells his mother and the baby elephant is then looked after by former circus star Holt (Colin Farrell) and his children, Milly (Nico Parker) and Joe (Finley Hobbins). Dumbo becomes a star, trained to fly as an act with the beautiful aerial artist Colette (Eva Green), in a new circus called Dreamland. The ambitious owner, V.A. Vandevere (Michael Keaton) partners with Medici to exploit Dumbo but ultimately, almost destroys Medici’s circus and the family of performers who unite to save Dumbo!

The PG fantasy adventure is a retelling of the 1941 Disney animated movie that 78 years later, adds additional characters and storyline, to make it a must-see family film. Director Tim Burton brings Dumbo to life, with adorable big blue eyes that will melt your heart and a lovable personality that will delight all ages. When Dumbo flies – it truly is thrilling! The story includes actors Burton has worked with before (Keaton, DeVito, Green) and Farrell, who plays a wounded WW1 vet returning to Medici’s struggling circus, where he once was the star. He brings a fatherly, loving parent role to the story. Although the plot has some dark themes (Dumbo and his mother are separated, Dumbo is forced to work, Milly and Joe are sad over the death of their mother), there are plenty of lighthearted moments, colorful circus acts, funny characters, breathtaking flights with Dumbo and themes of love, family and overcoming obstacles in life, to entertain kids 3 to 99! I enjoyed this newer version of the classic Disney tale – especially the surprise happy ending!
“Remember to Choose Your Movies Wisely”