Holly on Hollywood – Despicable Me 3 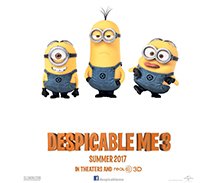 Holly on Hollywood
“Despicable Me 3”
by Holly McClure

Despicable Me 3 is the third in the hit franchise about the reformed supervillain Gru (voiced by Steve Carell) and his new wife, Lucy (Kristen Wiig), who are both Anti-Villain League agents. This time around, Gru, Lucy and their three girls, discover Gru has a twin brother Dru (also Carell) whom he’s never met and decides to visit him. The brothers quickly bond and decide to steal a famous diamond from Balthazar Bratt (voiced by “South Park’s” Trey Parker), a former child TV star turned villain, who stole the diamond and plans to destroy Hollywood for how they ruined his career.
The PG rating is for….

…mostly cartoonish violence and scenes of Hollywood being destroyed by a giant robot with lasers. Lots of chase scenes, explosions and the minions get thrown in prison. There’s mild put-down language, a couple of funny scenarios that show a characters partially nude buttocks (which of course is animated so you can’t really see anything) and a catchy credit’s song “Yellow Light” by Pharrell Williams with the line, “Let’s make out like we’re lovers” in it…not really appropriate for a kids movie. The subplot with the twin brothers is funny and endearing and there are sweet scenes of Lucy attempting to be a good mom to the girls. Loved the 80’s throwback humor and classic 80’s music that will appeal to the adults, including the minionese version of Gilbert and Sullivan’s, “I Am the Very Model of a Modern Major-General“.  This isn’t the best of the Despicable Me movies, but it’s entertaining, cleverly written, and promotes positive messages about family, the importance of siblings and some funny sarcastic jabs at how Hollywood uses child stars.