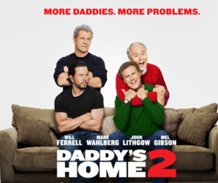 “DADDY’S HOME 2” is the sequel to the hit comedy “Daddy’s Home“, about dads Dusty (Mark Wahlberg) and Brad (Will Ferrell). Dusty and Brad are proud co-dads, who share everything with their kids – including Christmas. But this year the two get surprise visits from their dads: Dusty’s tough-guy father, Kurt (Mel Gibson), and Brad’s overly-sweet dad (John Lithgow). The extended family goes to a mountain rental house for a week, where chaos ensues as they all strive to get along or risk ruining Christmas for everyone.

The PG-13 comedy has mature themes, crude humor and behavior, language and comedic violence. The holiday-themed comedy looks like a family-friendly movie for all ages but it’s not – there’s an abundance of crude jokes, mature dialogue, sexual innuendoes and themes about divorce and parenting. Dusty’s dad is a womanizer and who was barley involved in his life, Brad’s dad is overly loving but has marital problems of his own, a boy is teased by his sisters about liking a girl that ends with him kissing several girls, two young girls get drunk on spiked eggnog (which is played as comedy) and a young girl accidentally shoots her grandfather in the shoulder before shooting wild turkeys. Since this is a movie about fatherhood, the focus is on the male characters who are portrayed from weak to tough – female characters are barely developed or explored. The subject of divorce and the role step-parents play is discussed in several different scenes – some in a comedic way and a few that are more sad than funny. Let’s face it – divorce isn’t funny. Although “Daddy’s Home 2” is a comedy that depicts different kinds of men/fathers, some scenes and dialogue may bother children of divorce. Although Wahlberg and Ferrell are a great comedy duo, I wouldn’t call this insensitive comedy, a family-friendly holiday movie.