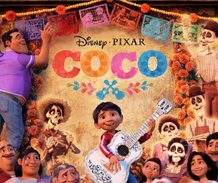 “Coco” is the colorful story of Miguel (Anthony Gonzalez) a young boy who wants to be a musician but for generations, his family has banned music from the house because Miguel’s great-great-grandfather left his great-great-grandmother Imelda and their young daughter, Coco, to become a musician. On the Day of the Dead celebration, Miguel finds himself communicating with talking skeletons who turn out to be his family in the Land of the Dead. He secretly plays the guitar and yearns to become a famous musician like his idol, Ernesto de la Cruz (Benjamin Bratt), the long-dead singer/actor from Miguel’s hometown. Miguel teams up with Hector (Gael García Bernal), a friendly skeleton who claims to know de la Cruz and will lead Miguel to him, if he will help him get home.

The PG animated adventure is a colorful, vibrant, Pixar gift for all ages, as only Pixar can do it. The film explores the traditions of the Day of the Dead, combining Mexican folklore and traditional themes. It has catchy music, a complex but comprehensible plot, and cultural humor and satire. There are memorable songs (“Remember Me” from the husband-and-wife team behind the Frozen soundtrack), lovable characters and themes of family love, honor and believing in others. It’s a little hard for me to recommend a movie for children about a boy crossing over to the “land of the dead” and meeting his dead relatives who are all skeletons, is hunted by colorful spirit animals, and goes through a series of chase scenes and events, to find his way home. Little ones may be a disturbed or frightened by those scenes. But all ends well with a sweet and emotional ode to past relatives, an encouragement to love and appreciate family and to always follow your dreams.