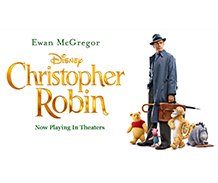 “CHRISTOPHER ROBIN” is a live-action sequel to the classic Winnie the Pooh stories. Christopher Robin (Ewan McGregor) is a stressed and overworked adult who forgets about his childhood friends from the Hundred Acre Wood. When Winnie (voiced by Jim Cummings) appears at his home in London, Christopher decides to take Pooh home to reunite him with Tigger,  Kanga, Roo, Owl, Piglet, Rabbit, and Eeyore, where he is reminded of a slower pace of life he left behind as a child. He also realizes he’s ignored his loving wife Evelyn (Hayley Atwell), and their young daughter, Madeline (Bronte Carmichael).

This is a heartwarming, PG, family-friendly sequel to the beloved Winnie the Pooh tales that has entertained generations. It’s a sweet story with an introduction that shows…

Christopher Robin growing up, playing with his friends, losing his father and mourning his death, going off to WWII, coming home and meeting his wife and finally, having his own daughter. When Pooh finds Christopher, he’s unhappy, overworked and neglecting his wife and daughter. After he takes Pooh home he has a scary dream and imagines he’s running from heffalumps and woozles.
There’s lots of physical comedy involving the animals and a strong theme of being grateful for your life and those you love, as well as the importance of compassion, play, friendship, imagination, and parent-child relationships. The movie is a simple tale that takes you to a timeless world…and that’s the point!
“Remember to Choose Your Movies Wisely”