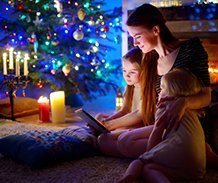 Kids are out of school, families gather to celebrate the Christmas holidays and a good movie is a perfect tool to bring everyone together. I’m listing 10 of my favorite suggestions (there are many more I could have included) in no particular order, that have been my family’s favorites for years…hopefully they will become yours as well.

1)    It’s a Wonderful Life
This is my favorite beloved classic (offered in black and white and color) that has remained popular for 70 years since its release. The movie, directed by Frank Capra, stars Jimmy Stewart as George Bailey, who marries Mary (Donna Reed) and lives in the town of Bedford Falls. Instead of living the life of travel and adventure he dreamt of as a young man, events take a turn for the worse and George considers ending his life, until his guardian angel Clarence steps in to show him what life would have been like without him. For 70 years kids to adults have watched this Christmas classic and learned that when a bell rings, an angel gets his wings.

No matter how many times I watch Will Ferrell dressed up as Elf, I still laugh at the story of Buddy, a human raised among elves, who journeys to New York City to find his biological father and instead, finds a new family to love and convince that Santa is real. Kids will delight in Buddy’s naiveté and the silliness that comes when he explores his new world. There are many classic quotes that people love from this movie (“You sit on a throne of lies!” “You’re an angry elf!”, etc.) James Caan, Bob Newhart, Ed Asner, Mary Steenburgen, and Zooey Deschanel also star.

Nicholas Cage plays Jack, a wealthy, successful, Wall Street executive, living in New York City who one day, meets an angel who gives him a chance to see what his life could be like if he’d made other choices. When he wakes up the next day he is married to his former sweetheart, Kate (Tia Leoni) and has a home and family.  Jack eventually learns to enjoy his new life, bonding with his children, falling in love with his wife and working hard at his job and then, he’s faced with returning to his former life, where he realizes what really matters.  Jack sets out to find Kate and convince her of the life the two of them could have had together. At first she thinks he’s crazy and then….  I love this movie! One of my favorites that makes me laugh, cry and appreciate family, every time I see it!

Before he was a governor, Arnold Schwarzenegger played a workaholic dad who goes on a mission to find the last Turbo-Man action figure in town for his son. No one, not even the hilarious Sinbad or Santa Claus, can get in his way. This Christmas classic is full of physical comedy and corny-but-funny jokes. I actually have a Turbo Man action figure!

All Ralphie Parker (Peter Billingsley) wants for Christmas is a BB gun – a Daisy Red Ryder 200-shot Carbine Action Air Rifle. He is obsessed with wanting this toy, even when all the adults in his world, including a store Santa tell him, “You’ll shoot your eye out!”  Hilarious scenes like a boy getting his tongue stuck on a cold pole, Ralphie getting his mouth washed out with soap and Chinese restaurant singers singing “fa ra ra ra ra” to Ralphie’s family on Christmas. I laugh year after year – it’s a classic!

When Kevin (Macaulay Culkin), the youngest child in a large family gets accidentally left behind at home, he eats too much junk food and single-handedly defends his house against robbers. Kevin’s ingenuity saves the day and his impish sweet face is adorable as he hatches booby traps and scatters toy trucks across the floor to trip up Joe Pesci and Daniel Stern. Adults will enjoy this as much as the kids. My parents forgot my sister at a restaurant when she was 4….it happens!

7)    Miracle on 34th Street
A lovely, classic story about a six-year-old girl, Susan (Natalie Wood), who has doubts about the existence of Santa Claus and a department store Santa (Edmund Gwenn) who attempts to convince Susan and her mother (Maureen O’Hara) that he’s the real deal. You can get this 1947 classic in black and white or color. I love Kris Kringle and the court scene in this version and Natalie Wood is forever adorable, doubting little girl who questions Santa’s very existence.

8)    The Santa Clause
Tim Allen plays a divorced dad who accidentally lands the job of Santa after the real Santa takes a fatal fall off his roof. It takes a while for Calvin to believe he’s Santa but eventually, he embraces his new job. Tim Allen is hilarious and I love seeing the transformation to Santa – beard, belly and rosy cheeks! This is a perfect movie for all ages.

9)    White Christmas
This 1954 musical is yet another true holiday classic. Starring Bing Crosby, Danny Kaye and Rosemary Clooney, and featuring the Irving Berlin song “White Christmas,” which has come to symbolize an old fashioned Christmas. I always enjoy seeing Crosby and Kaye do their song and dance numbers but my 3 sisters and I always enjoyed singing the “sisters” song that Clooney and Vera Ellen made famous. The final Vermont ski lodge scene is a classic. Lots of singing and dancing may get the kids choreographing their own show by the end!

10) How the Grinch Stole Christmas

Ron Howard directed Jim Carrey in a role that was made for him!  Filled with songs, colorful characters and creative sets, it made the animated version come alive!  Carrey truly made a classic creepy character (almost) lovable.