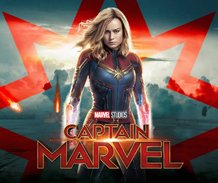 CAPTAIN MARVEL takes place in space and the 1990’s. When a galactic war between two alien races causes a Kree warrior, Vers (Brie Larson), to land on Earth, she soon regains lost memories and discovers her former identity. Carol Danvers was a pilot in the military and holds a secret in her lost memories that the aliens need. She joins special S.H.I.E.L.D. agent Nick Fury (Samuel L. Jackson) and discovers what that secret is as they battle the shape-shifting aliens who followed her. In the process, she saves the planet from an invasion and becomes Captain Marvel, one of the universe’s most powerful superheroes! Annette Bening, Djimon Hounsou, Jude Law also star.

The PG-13 sci-fi fantasy adventure, has continuous action with numerous fight/chase scenes, space weapons, guns, ugly aliens and a couple of curse words, so parents, heed the rating. Larson is perfectly cast as Danvers. She exemplifies intelligence, strength, integrity, faces up to the enemy without fear, is the right woman to be Marvel’s first female heroine and is a fantastic role model. The story is engrossing and rewarding on many levels, encouraging the audience to look at a situation from both perspectives. There are positive messages of perseverance, integrity, overcoming doubt and watching a fearless, confident, mighty woman, become a superhero. This is an Avengers origin story introducing Captain Marvel, the beginning of S.H.I.E.L.D. and a young Nick Fury – which will connect the dots to the upcoming final “Avengers: Endgame” so stay for the credits to the very end, for a preview of what’s to come!
“Remember to Choose Your Movies Wisely”