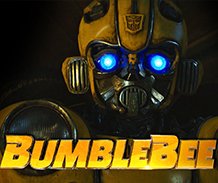 BUMBLEBEE takes place in 1987 when, on her 18th birthday, Charlie (Hailee Steinfeld) finds an old yellow Volkswagen Beetle in a junkyard and fixes it for her first car.  Soon the car transforms into a transformer that Charlie names Bumblebee. She discovers the Transformer was sent from the Cybertron leader Optimus Prime – to avoid their enemy, the Decepticons. When two Decepticon enforcers (voiced by Angela Bassett and Justin Theroux) come to Earth to find Bumblebee – he has to battle not only the decepticons but government agents John Cena and John Ortiz.

The PG-13 action adventure has mild language, lots of big fight scenes between Transformers and humans, explosions and destruction. But it’s the heart and relationship that Steinfield brings to Charlie, that gives the story a warmth, depth, and charm, that pre-teens to adults will enjoy. Charlie begins the story grieving her late father’s death and miserably tolerating her mom and step-dad. But finding Bumblebee transforms her from a lost teen to a happy, gutsy hero. Charlie instantly connects with the voiceless, shy alien, introducing him to ’80s movies and music, which he uses to speak for him. Charlie’s sidekick is her nerdy neighbor and together they fight for Bumblebee.  I enjoyed this coming-of-age story that is a different kind of Transformer story but one of my favorites in the series to date – I hope there’s a sequel!