Holly On Hollywood – Born in China 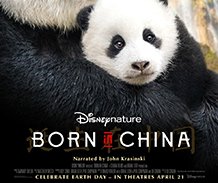 Holly on Hollywood
“Born in China”
by Holly McClure

Born in China is an epic nature documentary filmed in the wilds of China and narrated by John Krasinski. The story follows animal families throughout China for over a year, as they’re born, grow up and learn to survive. Your hearts will melt seeing a doting mother panda cuddling her cute baby, a two-year-old golden monkey trying to fit in with his peers, a rarely seen mother snow leopard facing the very real drama of raising her two cubs in harsh and unforgiving surroundings and Tibetan antelopes who have to watch out for wolves. There are lots of cute baby animal moments along with stunning, never before seen footage of China that most cannot even imagine.
Although this is a G rated family film, marketed to adults and little ones. It’s a story about animal families that parents and older people will enjoy…

…actually all ages would enjoy it but I’m not sure you’ll get teenagers to sit through this one. Parents need to be aware that there are scenes of realistic life living with predators and trying to survive. There’s the death of an animal mother, A baby monkey is swept up by a hawk, animals attack each other and other scenes of animals in peril, so it may be a little ‘too real’ for sensitive little ones. Seeing moms take care of their precious little ones in the midst of breathtaking beauty never gets old.