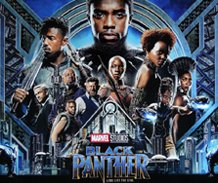 “Black Panther” is an epic, visual adventure that takes place in the fictional African kingdom of Wakanda – where people are technologically advanced beyond any other nation. It’s built on top of a meteorite made of vibranium (the strongest metal on Earth) and hidden from the world behind an elusive rainforest. As far as the rest of the world knows, it is a third-world country. After the death of his father, Black Panther/T’Challa (Chadwick Boseman) becomes King and protector of his people. He has superhero strength, wears a bullet-proof suit of vibranium and is virtually, indestructible. The story introduces Black Panther’s history and shows how he uses his powers to fight for his kingdom, making himself known to the outside world. T’Challa is supported by his family (Angela Bassett, Letitia Wright, Forest Whitaker), friends (Daniel Kaluuya), his all-female royal guard lead by Danai Gurira and his warrior girlfriend Lupita Nyong’o. Andy Serkis also stars.

The PG-13 action fantasy is visually phenomenal with incredible special effects, a stellar cast and a unique and compelling storyline. Black Panther brings together the largest black cast ever assembled for a major Hollywood movie, with a variety of strong female roles. Director Ryan Coogler co-wrote the script with a unique idea and great characters. Boseman is impressive as the Black Panther, along with memorable moments from a supporting cast, including Michael B. Jordan, who plays the main villain. Black Panther is innovative and impressive, with lots of exciting superhero action, amazing stunts and funny scenes. It’s a worthy addition to the Marvel family, breaking box office records and gaining lots of new fans (including me)!  I loved this movie!  It’s one of those films you’ll think about long after you leave. Be sure to stay till the very last credit, for a sneak peek of a favorite character’s return!