Holly on Hollywood – Because of Gracia 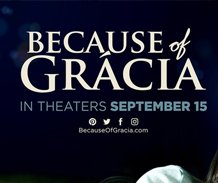 Holly on Hollywood
“Because of Gracia”
by Holly McClure

Because of Gracia” is about Chase Morgan (Chris Massoglia) – a typical teen entering his senior year in high school. He loves to daydream, hang out with his best friend OB and enjoys observing others, rather than partaking or taking a stand on anything. When a new girl, Gracia (Moriah Peters), comes to school…

…her beauty and personality immediately make her popular with most everyone but a group of jealous, mean girls. Gracia or Grace, as she likes to be called, not only makes a difference in the lives of fellow students but becomes best friends with Chase and OB. As Chase and Grace’s friendship grows, Chase begins to find his voice and take a stand for what he believes in. Ben Davies, John Schneider, also star.

The PG-13 teen-friendly story deals with mature themes that high school kids are faced with; bullying, mean girls, sexual pressure, teen pregnancy, freedom of religion, taking a stand for what you believe in and standing up for your faith. There are some funny, light-hearted and even silly scenes that prevent the story from getting too heavy, mixed in with a few emotional scenes dealing with a Christian girl who becomes pregnant. This is a well-written, perfectly cast movie with themes about taking a stand for what you believe in, persecution for those beliefs, temptation and forgiveness, that Christians will relate to and most audiences will be inspired by. Peters said she played a role that closely mirrored her real life. She was a former contestant on “American Idol” who overcame ridicule from the judges because of her faith. She remained true to her Christian vow – her first kiss was on her wedding day to Joel Smallbone, musician and brother to Rebeca St. James. “Because of Gracia” is a well-made, meaningful film, with a powerful message for all ages.