Holly on Hollywood – Beauty And The Beast 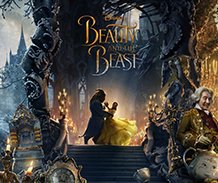 Holly on Hollywood
“Beauty And The Beast”
by Holly McClure

Beauty and the Beast is a live-action remake of the classic “tale-as-old-as-time” 1991 animated musical. Belle (Emma Watson) is a beautiful, book-loving girl, who lives with her father (Kevin Kline) in a small French village and spends her days dodging annoying marriage proposals from Gaston (Luke Evans). One day when Belle’s father doesn’t return home…

….she sets out to find him but instead, discovers an enchanted castle owned by a Beast (Dan Stevens) who takes Belle prisoner. Belle befriends the enchanted staff and soon learns to look at Beast for who he truly is. Josh Gad, Ewan McGregor, Emma Thompson also star.

Parents – the PG drama-fantasy is a little over 2 hrs. with numerous songs, some scary images of the beast, angry wolves that attack people in two fight scenes, a character who’s shot and another who dies. It may be too much for little ones and better for kids 7 and up. Watson plays a beautiful, sweet and wholesome Belle, who is relatable and sympathetic. Stevens’ Beast is scary looking yet he manages to make him lovable and in fact, I kind of missed Beast when he turned back into the Prince! Evans is perfect as the annoying-full-of-himself, narcissistic, Gaston. And the cast of movie stars who play the household characters are all delightful and make their mechanical objects seem almost human – until they finally are.

There are big musical numbers like “Gaston” and “Be Our Guest” that are a visual treat, a choreographed extravaganza and tribute to the old Hollywood style of musical. And the all-important, gorgeous, iconic yellow dress (that little girls have dressed up in for years) will make girls 3 to 93 wish they could be Belle, as she glides across the dance floor in Beast’s arms.

The scenery is beautiful, the choreography fantastic, I loved the ornate set designs and enjoyed Belle singing an opening song on top of a mountain (reminiscent of Julie Andrews in The Sound of Music). I enjoyed this delightful and visually enthralling movie made in the classic Disney style that will please young and old alike. The message of the movie is also a Disney formula, all about not judging a book by its cover or, in Belle’s case, a Beast by his horrific looks. And I can appreciate that. But that subtle message of “non-judgement” and “acceptance” is also being pushed by Disney to accept the gay subplot about LeFou liking Gaston…and even though it’s not brazen and barely noticeable…that may not go over so well with some parents.

Now to address the “gay controversy” – Josh Gad plays Gaston’s sidekick, LeFou. In the 1991 version LeFou is just a portly, silly, sidekick. In this remake, Le Fou fondly admires his best friend Gaston and makes it clear that he does with little comments and innuendos, only Gaston doesn’t seem to notice it because he’s too busy consumed with his love for Belle and himself. Parents will get the innuendos – most kids won’t. There’s a really brief scene that shows a man dressed in woman’s clothing and in the end, during the ball, there’s a brief shot of Le Fou dancing with that same man. The scene is so quick it’s hardly noticeable but that’s the “gay scene” that is getting all the attention.
“Remember to Choose Your Movies Wisely”