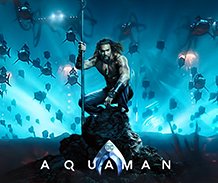 AQUAMAN stars Jason Momoa as the DC comic superhero who’s part human, part super hunky undersea King – born to a human father and queen-of-the-aquaworld mother (Nicole Kidman), who was kidnapped and taken back to the sea when Arthur was an infant. Years later when his half-brother, King Orm (Patrick Wilson), decides to unite the undersea kingdoms against the surface world, Atlantean Princess Mera (Amber Heard) convinces Arthur to help her search for a mystical weapon that will put him back on the throne and prevent the war that will destroy the surface world. Willem Dafoe, and Dolph Lundgren co-star.

The PG-13 colorful underwater action/adventure/fantasy has lots of comic book-style violence, unique fight scenes, ugly sea monsters, cool weapons, creepy looking enemies and mild language, so it’s best for mature pre-teen to adults. Like Wonder Woman, Aquaman is an epic, entertaining, CGI superhero fantasy that works because Momoa is a bigger than life, fun and likeable hero, with great comic instincts. Kidman brings important emotional depth to her character and Heard is not only beautiful but a brave heroin who stands for what’s right. Themes of courage, loyalty and standing up for what’s right help Aquaman deliver an energetic, good old-fashioned fun addition to the Justice League/DC Extended Universe. Be sure and stay for the end credits that reveal another DC plot!
“Remember to Choose Your Movies Wisely”