Holly on Hollywood – All Saints 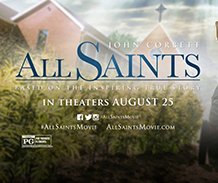 Holly on Hollywood
“All Saints”
by Holly McClure

All Saints” is based on the inspiring true story of salesman-turned-pastor Michael Spurlock (John Corbett), his wife Aimee (Cara Buono) and son Atticus (Myles Moore), who move from New York to rural Smyrna, Tennessee to become the pastor of a failing church he’s ordered to shut down. This does not endear him to the few remaining members of the All Saints flock, especially after a group of refugees from Southeast Asia begin coming to the church for food and aid. With a growing congregation depending on him just when the church is being shut down, Michael comes up with a plan to try and save his flock.

The PG well-crafted faith-based film has a true pro-refugee message and realism factor because it was filmed at the actual All Saints Episcopal Church in Smyrna on which the film is based, and features members of the All Saints parish in supporting roles. Corbett makes the movie work, giving a career-highlight performance as Spurlock and making everything he goes through realistic. The struggles the church faces and the incredible odds that are stacked against them, makes this a story that can reach beyond the church and entertain all audiences. The scenes between the displaced Karen people, Spurlock and the congregation, are a touching reminder of the Christian charity we all need to extend to refugees seeking a better life. This is a Hallmark style story where everything turns out all right for “All Saints” and the refugees with an unexpected ending. There’s a sweet redemptive message about teamwork, friendship, generosity and having faith and trust in God.