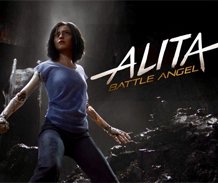 ALITA: BATTLE ANGEL,  takes place in the 26th century,  where the world has been devastated by “The Fall.” Dr. Dyson Ido (Christoph Waltz) finds a cyborg girl with an intact brain in a scrap heap and gives her a new body, calling her “Alita” (Rosa Salazar). The beautiful, big blue-eyed girl has no memory of who she is or her former life but soon befriends a boy named Hugo (Keean Johnson) and gets involved in the violent sport called Motorball. She soon discovers an underworld of crime and an army of cyborgs who want to destroy her. In the midst of fighting, she remembers her former life and realizes she was born to be a battle angel. Mahershala Ali also stars.

The PG-13 post-apocalyptic sci-fi action movie has brief language (one “F” word), lots of fantasy violence and fight scenes between Cyborgs and humans. Female Cyborg characters are sexualized and some male/females may be too scary or creepy looking for younger children. There’s a brief romance between Alita and Hugo and the death of a main character. Co-written by James Cameron (Avatar) and directed by Robert Rodriguez, the plot is more for mature pre-teens to adults. Lots of state-of-the-art visual effects make this an entertaining and fascinating story, with an ending that leaves room for a sequel.
“Remember to Choose Your Movies Wisely”