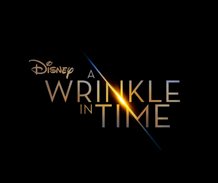 Holly on Hollywood
“A Wrinkle In Time”
by Holly McClure

“A Wrinkle in Time” is based on the children’s book by Christian author Madeleine L’Engle about Meg (Storm Reid) and her brilliant little brother Charles Wallace (Deric McCabe), whose scientist father (Chris Pine) went missing five years ago after discovering a new planet and a concept of space travel. Meg is a teen misfit at school who is bullied, sad and lonely, feeling the absence of her dad. One day when her classmate, Calvin (Levi Miller) walks her home from school, they’re visited by supernatural travelers: Mrs. Whatsit (Reese Witherspoon), Mrs. Which (Oprah Winfrey) and Mrs. Who (Mindy Kaling). Meg discovers her father is being held prisoner by a terrible power and only she and her brother can set him free.

The PG adventure, fantasy, is intended for 8 to 12 year-olds because a couple of scenes that may be too intense for younger kids. In the book, the three “Mrs.” are supposed to be angels or messengers of God but the goofy behavior, bizarre colorful costumes, bright glitter makeup and weird hairdos, especially the glammed up Winfrey, feel anything but angelic. I liked the fact that Meg discovers she can be a hero and the CGI is an impressive visual imaginary. But the uneven script, weird scenes, politically correct changes (the Happy Medium is a man (Zach Galifianak) who tries to be a father figure to Meg, in the book it’s a woman), diversity in casting (Meg is a redhead in the novel, but director Du Vernay cast Storm Reid to be biracial, with a white father and black mother), and women-are- strong/men-are-weak theme, veers from the novel and it’s spiritual message, which could be disappointing for fans of the book. Younger girls may enjoy this movie but that leaves out a lot of potential audience. I was surprised to read that Director DuVernay said she chose Levi Miller to play the role of Calvin, “because that was so powerful, to show a white boy following a black girl through the movie. I’ve never seen that.”  Really? It’s that kind of mindset that comes across in several scenes, which ruined the movie for me. I was honestly looking forward to seeing “A Wrinkle in Time” and wanted to like it, but I couldn’t get past DuVernay’s agenda. I wonder, if Madeleine L’Engle was still alive, what would she think?