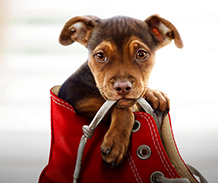 Holly on Hollywood
“A Dog’s Way Home”
by Holly McClure

A Dog’s Way Home is a family-friendly adventure drama about a dog named Bella (perfectly voiced by Bryce Dallas Howard), who becomes separated from her family and travels more than 400  miles to find her way home through the rugged Colorado mountains. Bella gets adopted by medical student Lucas (Jonah Hauer-King) and his mom (Ashley Judd), a veteran. She loves her new home and owners, but soon a strict landlord and a mean animal control officer changes all of that and separates Bella from her family. She must then make the long, dangerous journey back home with help along the way from man and animal.

The PG family-friendly animal adventure stars a melt-your-heart rescue dog named Shelby, who literally went from the kennel to being the star of her first movie! There are lots of cute scenes between Bella and humans she meets along the way. But there are also a few intense chase scenes including a vindictive, corrupt dogcatcher and a pack of wild wolves. And there’s a sad scene when Bella almost dies of dehydration, while chained to a homeless veteran after he dies in his sleep at their campsite. Bella’s picaresque journey takes her across hundreds of miles of beautiful Colorado mountain ranges where she befriends an orphaned baby cougar. This is a classic story of loyalty, love and devotion beautiful told in an incredible journey.  A Dog’s Way Home explores the unbreakable bond between humans and our pets. But the real life happy ending came after filming wrapped – Shelby became a therapy animal for children who are in the hospital, much like Bella.
“Remember to Choose Your Movies Wisely”