Holly On Hollywood – A Dog’s Purpose 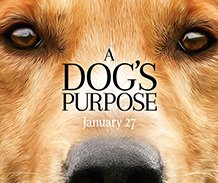 Holly on Hollywood
“A Dog’s Purpose”
by Holly McClure

“A Dog’s Purpose” is a delightful story of a devoted dog (voiced by Josh Gad) who starts out as a puppy named Bailey and continues his journey by returning in a different dog’s body to multiple owners. Through the years he helps each owner find love and laughter in life, while discovering his own canine purpose as well. Dennis Quaid, Peggy Lipton also star.

The PG family-friendly story is filled with…

…adorable puppies, funny moments between a dog and cat, humorous scenes with owners, witty dialogue and analogies about life from a dog’s perspective (like when Bailey “finds” the “missing family cat”, that he digs up in the back yard). There are some brief scenes that are more serious like a boy dealing with an abusive alcoholic dad, the rescue of a girl who was kidnapped by her father and several owners who are sad after losing their pets. Overall, I truly enjoyed “A Dog’s Purpose” and so did everyone in my audience! This is an entertaining, funny and heart-warming story, that adults will enjoy just as much as the kids.