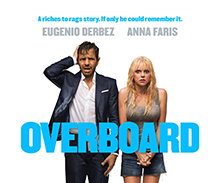 Kate (Anna Faris) is a single, working-class mother of three who’s hired to clean a luxury yacht that belongs to Leonardo (Eugenio Derbez), a selfish, spoiled, and wealthy Mexican playboy. After rudely speaking to Kate and refusing to pay her, he pushes her (and her equipment) off his boat and orders his captain to leave the harbor. Once at sea, a drunk Leonardo falls off the boat, washes on shore and wakes up with no memory of who he is. Kate sees his face on the news and shows up at the hospital, pretending they are married so that she can take him home and make him pay for what he did. He gets a manual labor job, cooks and does chores around the house. Eventually, “Leo” settles into his position of husband/father and learns to like his new life, even growing to love the girls and Kate.

The PG-13 is a remake of the hilarious 1987 Goldie Hawn/Kurt Russell comedy, only the main roles are gender-swapped. Parents need to be aware of some adult themes and behavior: a man “parties” with several bikini-clad women, kisses one, and stops to search for condoms, his naked bottom is partially shown briefly, mild language, themes about lying and subtitles when he speaks spanish. Derbez is a huge star in Mexico known for his pratfalls, frantic energy, and funny faces. His “transformation” into a nice guy is occasionally funny, like when Leonardo takes a construction job and is kidded by his co-workers for having ‘lady hands’. Garry Marshall’s 1987 comedy was hilarious with funny, quotable lines and the irresistible charms of Goldie Hawn and Kurt Russell. Anna Faris is a gifted comedian and has some funny moments but unfortunately, the two stars have zero romantic chemistry. Scenes with her three blonde daughters are sweet and there are a few touching ‘family’ scenes that make the movie start to work towards the end. Sadly, the 2018 “Overboard” remake pales in comparison to the hilarious original but it’s not a complete waste of time. It is still entertaining and in the end, has a redemptive message about the importance of family.