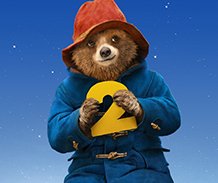 “Paddington 2” continues the story of Paddington bear (Ben Whishaw), who lives with his adopted English family, the Browns. Paddington wants to buy a special gift for his Aunt Lucy’s 100th birthday so he takes on odd jobs to earn the money. Before he’s able to buy it, the book is stolen and Paddington is wrongfully accused and sentenced to prison, based on the testimony of a neighbor, Phoenix Buchanan (Hugh Grant). Soon he finds a way to escape and return to his beloved family. Sally Hawkins, Hugh Bonneville also star.

The PG family friendly “Paddington 2” is the sequel to 2015 adorable adaptation of Michael Bond’s beloved English books. Although the premise has Paddington in prison and the inmates look intimidating at first, eventually the scared bear charms them all with his compassion, kindness and marmalade sandwiches. Children will enjoy the silly scenes and physical comedy of Paddington, who gently reminds them that if you treat others with respect and generosity, the world will be a sweeter and more colorful place. Adults will appreciate the family dynamics and situations they get into. Grant is a perfect mix of humor and villainous hi-jinks. This is a perfect kid-friendly movie for the whole family with plenty of silly, physical humor mixed with messages about compassion, empathy, kindness, and the importance of family.