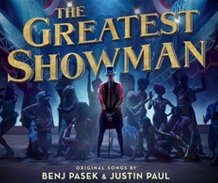 Holly on Hollywood
“The Greatest Showman”
by Holly McClure

“The Greatest Showman” is based on the life of Phineas T. Barnum who rose from poverty to become the world-renowned creator of his own circus. The story follows Finn’s (Hugh Jackman) climb to fame and wealth with his wife Charity (Michelle Williams) and two girls. He opens a museum of oddities and ultimately, his believe-it-or-not Circus filled with unusual-looking people and acts like the bearded lady (Keala Settle), Tom Thumb (Sean Humphrey), a black trapeze artist (Zendaya), Dog Boy, Tattoo Man and a cast of others. Zac Efron and Rebecca Ferguson also star.

This is a PG biopic musical that…

…plays like a Broadway show with phenomenal songs and catchy lyrics that become anthems like Jackman’s, “The Greatest Show”, “A Million Dreams” and a romantic duet, “Rewrite the Stars”, beautifully choreographed for Efron and Zendaya. There are themes dealing with 1800 America upper class looking down on lower class, prejudice against an interracial relationship and mild violence from men protesting the “freaks” who perform in the show. Jackman is dynamic as Barnum. From the first frame to the last, he’s captivating to watch and makes musical numbers seem a natural part of the story. He plays the brilliant P.T. Barnum who conceived of popular entertainment as a business, which he called, ‘the show business’. Efron holds his own as Barnum’s right-hand man who has great chemistry with Zendaya and Ferguson shines as celebrated Swedish opera singer Jenny Lind in her captivating and angelic number, “Never Enough”, magnificently sung by “The Voice” alum Loren Allred. Although the movie take privileges with several facts about Barnum’s life (including an implied romantic infatuation with Lind, and Efron and Zendaya’s fictional characters) the compelling story, memorable songs, lovable characters, colorful costumes, incredible choreographed dance numbers and stunning cinematography, make this a truly entertaining movie. Themes about the importance of family and accepting others based on who they are, not how they look, is a message memorably presented in “The Greatest Showman”. This is a throwback to the old fashioned, PG rated musical that’s presented in a modern way that’s never been done before and will appeal to all ages. Don’t pay attention to Hollywood dissing this movie – the box office is proving the public loves it – and so did I!