Saved By Grace takes place on Thanksgiving and is a thought provoking, uplifting story of love, loss and God’s grace. Rick (Joey Lawrence) is a former police officer who, after five years is still grieving the loss of his wife, from a violent shooting that took place on Thanksgiving. Because of his pain, he’s become estranged from his son (who lives with his grandmother) and is still angry with God. On Thanksgiving he stops to pick up Grace (Catalina Rodriguez), a beautiful woman who asks for a ride to her family’s home. Along the way the two talk about their lives and discover similar areas of pain, loss and grief, that both have endured. A Godly bond develops between the two and the day ends in reconciliation, forgiveness and love.

This is a non-rated, family-friendly-faith-based story for older audiences who can appreciate the mature themes. I enjoyed the… 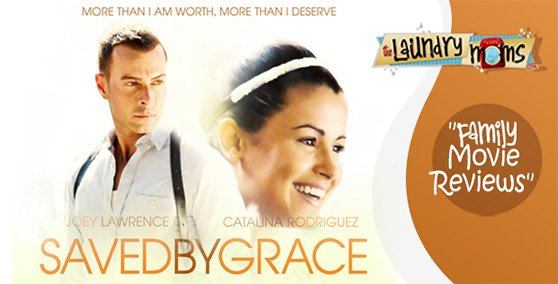 realistic dialogue, great chemistry between Rick and Grace, and themes that tackle tough questions about faith, doubts and coming to terms with being angry at God. I enjoyed seeing how Grace was able to reach Rick through a sweet spirit and gentle dialogue about her faith, something many Christians will relate to and understand.

I had to get past a few plot holes that didn’t make sense to me (why was Grace on the road without a cell phone or way to get to her family, why hadn’t Rick had any contact with his son over five years and a few more), however the solid performances by Lawrence and Rodriguez, a thought-provoking storyline, great cinematography and music, make Saved By Grace a joy to watch anytime of the year. Go to skipstonepictures.com or Amazon for more information.