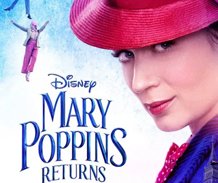 Oscars are around the corner so we thought we would re-introduce some of the movies that have already been nominated in other awards shows and will most likely be nominated for an Oscar. “Mary Poppins Returns” has received several nominations including Best Actress and Best Song.

MARY POPPINS RETURNS is a family musical set in the 1930s, that picks up several decades after the 1964 film, “Mary Poppins”. Michael and Jane, the two Banks children at the center of the original story, have grown up to become a grieving widower (Ben Whishaw) and a caring sister (Emily Mortimer). Michael has three children (Pixie Davies, Nathanael Saleh and Joel Dawson) who are still grieving their mother’s death. But never to worry, the next generation of Banks kids are in for a treat when Mary Poppins (Emily Blunt) returns to Cherry Tree Lane to care for them and teach the entire family valuable lessons, with help from their friend, lamplighter Jack (Lin-Manuel Miranda). Colin Firth, Meryl Streep, Angela Lansbury also star.

This is a PG family-friendly movie but the plot deals with the death of the children’s mother, there is a villain and a few scenes of suspense (including a mostly animated chase through dark woods), but nothing is ever scary. Blunt is perfect in every way as Mary Poppins, keeping nostalgic viewers happy with tributes to the original character and beautifully carrying a tune.  Miranda is a pro and is shows and I was delighted to see Dick Van Dyke and Angela Landsbury make an appearance. The music was fun, not as catchy as the original but let’s face it, no one can compare to Julie Andrews. The whimsical, playful story creates a delightful world with amazing production design, colorful costumes and catchy, songs penned by Marc Shaiman and Scott Wittman (a few of which contain references to the Sherman Bros.’ original 1964 score). The plot is a little thin, the movie a bit long and if I’m being honest, I was a little disappointed…I think  I was trying to re-create my original experience as a kid. Mary Poppins Returns It’s definitely worth seeing – will this sequel replace the original?  No – but it’s still a sweet movie worthy of making memories with!