Holly on Hollywood – The House With A Clock In Its Walls 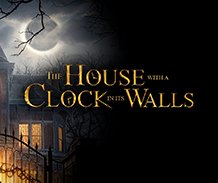 “The House with a Clock in Its Walls” is based on a popular children’s book and is marketed as a “starter horror movie” for families and tweens. When Lewis (Owen Vaccaro) parents die in a car crash, he’s sent to live with his estranged uncle Jonathan (Jack Black), a warlock whose next door neighbor Florence (Cate Blanchett), is his partner in sorcery. The two train the geeky kid to become a young warlock with growing powers. The three soon find themselves looking for a clock hidden somewhere in the old house that used to belong to his late friend, Issac Izard (Kyle MacLachlan). The clock signals a terrible event that Issac plotted before his death. In an effort to impress a popular kid at school, Lewis drags a forbidden magic book off the shelf and accidentally raises Issac from the dead, triggering a supernatural war to save the world.

The PG is for sorcery, creepy, scary and mean creatures, mild language, black magic, demonic toys that attack, a ghost, a morphing demon, witchcraft,  the occult, good witches and warlocks, and lots of jumpy, intense scenes for young kids, so it is definitely for mature pre-teens to adults. I am shocked that this movie is rated PG because of the downright scary, creepy, forces of evil that the little boy faces. Black is his typical goofy, lovable, animated self. I was surprised to see a serious actress like Blanchett in this movie but she and Black are an amusing pair, trading insults, jokes and working together to keep Lewis safe. But it’s the creepy image of a man’s head on a baby’s body, evil attacking dolls, magical battle scenes, flying CGI pumpkins and monsters that are too much for younger children. It’s kid friendly one moment then downright creepy the next. The payoff scene is Lewis magically throwing a basketball and hitting two bullies during a game at school and positive messages about teamwork, perseverance, friendship, and facing your fears.