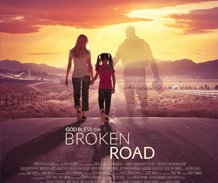 God Bless the Broken Road is a moving story about a young mother’s struggle with her faith after losing her husband in Afghanistan. Through friends, her daughter, and pastor, she embarks on a journey to learn how to trust in God’s plan for her life once again. Amber Hill is a woman who loves Jesus and faithfully attends church every week even leader the choir among other things. She is devoted to her daughter and a loving army wife.

Her husband Darren is a respected lieutenant in the army, a father figure for his unit, and a man of integrity who shares the Gospel everywhere he goes.

When he is killed in action…

…Amber is devastated. She must now figure out how to raise her daughter without her husband and without her faith. Starring Lindsay Pulsipher, Andrew W. Walker, Jordin Sparks, LaDainian “LT” Tomlinson, Makenzie Moss, Kim Delaney, and more.

God Bless the Broken Road is a beautiful and heartbreaking story of a woman’s devastation turning back into praise. It’s a story of hope, love, and redemption during a time when it’s very much needed. Bring your kleenex though because it’s probably going to make you cry. This heartfelt story paired with the faithful promises of God make up a beautiful movie that will inspire just about anyone.