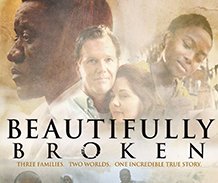 “BEAUTIFULLY BROKEN” is an inspiring story about a refugee’s escape, a prisoner’s promise, and a daughter’s painful secret. As three fathers fight to save their families, their lives become intertwined in an unlikely journey across the globe, where they learn the healing power of forgiveness and reconciliation. The story begins during the early days of the Rwandan Genocide, where murderous militia, hunt and slaughter their neighbors and co-workers. William (Benjamin A. Onyango), is a Christian who flees to a refugee camp with his wife and daughter, barely escaping death. Mugenzi, a farmer, is separated from his wife and daughter when he is forced to join one of the militia groups. In America, Randy (Scott William Winters), is a successful Nashville businessman who delights in his perfect life, his beautiful wife and little girl. Years later, a Rwandan refugee program brings William to America where he meets Randy and his now teenage daughter, Andrea (Emily Hahn). Andrea has been  a pen-pal with a girl in Africa and through the years they’ve become close. When she isn’t writing her Nashville friend, Umuhoza prays for the return of her father, who is in jail for crimes he was forced to commit. When Andrea begins to act differently, her journey of redemption ultimately brings all three families together in an unusual and truly miraculous way. Jessica Obilom, Caitlin Nicol-Thomas and Eric Roberts also star.

The PG-13 rating is for mature themes dealing with the Genocide crises, an implied rape (nothing is shown), murderous gun and machete wielding militia who attack villagers (nothing graphic) and the trauma from war and sexual assault. This is a true story which makes the movie even more incredible and meaningful. Christian music legends Toby McKeehan and Michael W. Smith play important roles. There’s beautiful scenery (filmed on location in South Africa), an inspiring song, “Beautifully Broken,” performed by three artists, including Grammy Award-winning gospel artist CeCe Winans and a well-written, intelligent, inspiring story, that celebrates the power of faith, forgiveness and the beauty of God’s love, reconciliation and redemption. This powerful story intertwines all three storylines and characters in a drama that mature pre-teens to adults will thoroughly enjoy!
“Remember to Choose Your Movies Wisely”