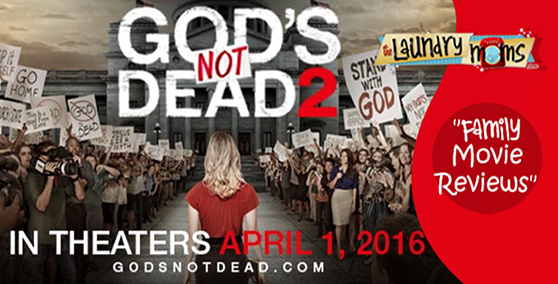 God’s Not Dead 2 involves a high school teacher (played by Melissa Joan Hart) who answers a student’s question about the teachings of Jesus and suddenly finds herself going to court to prove Jesus Christ really existed. Jesse Metcalfe plays Grace’s attorney, Tom Endler, who begins her case as a “doubting Tom” but ends up passionately defending Grace and her faith. Ernie Hudson and Robin Givens also star.

God’s Not Dead 2 sort of picks up where…

…the last one left off, starring some of the same characters and featuring a similar storyline, only this time, the PG rated drama takes place in high school. The mature themes and slower pace make it best for teens to adults, mostly because little ones might be bored by all the dialogue. Melissa is perfectly cast as Grace – a single teacher who loves her job, her students and takes a stand for what she believes in. Jesse plays a young lawyer full of doubts about his client but as the trial progresses, Tom learns to respect and understand what their courtroom battle really represents. I had a chance to interview the two stars and they both revealed how their roles helped them to better understand their own faith and the importance of knowing what you believe and why.

In a time when Christians are being persecuted all over the world – even in America – the message in God’s Not Dead 2, of what you believe and why, is a relevant issue every believer may someday have to defend. If you enjoyed God’s Not Dead then you’ll like God’s Not Dead 2 even more!