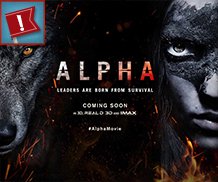 “Alpha” is a coming-of-age story about a Cro-Magnon boy named Keda (Kodi Smit-McPhee) whose father Tau (Jóhannes Haukur Jóhannesson) is the chief of a small tribe of hunter-gatherers.  Every year the tribe hunts bison to prepare for the coming winter. Tau, trains his son Keda for the dangerous hunt as a rite of passage, teaching him how to make fire and navigate using the stars. As the hunt begins, a bison attacks Keda and both go over a steep cliff. Keda hangs on to a lower ledge, but loses his grip and falls to an even lower one, breaking his foot and passing out. Tau desperately calls out to Keda who is impossible to reach, but the other hunters convince him to leave his son and return home for the sake of the tribe. Keda awakes, calls out to his father, realizes he is alone and through a series of events, must find his way back home. Along the way, he forms an alliance with a wolf he names Alpha. Keda and Alpha must overcome the elements, and other predators, to survive. Morgan Freeman narrates this original tale.

This PG-13 family-friendly adventure survival story about a prehistoric teen who is the first to bond with a wolf as a pet, is best for kids 8 and up. This is an exciting, intense and inspiring story with frequent peril from animals and nature, to both Keda and the wolf – all realistic and germaine to that time period. Kodi gives an incredible performance full of heart. There’s no sex or language but parents need to be aware that the movie has an invented language with subtitles. The story is inspiring with strong themes of courage, perseverance, and a loving bond between man and his original best friend, the wolf. Tau’s love for his parents gives him the perseverance, strength and courage, to survive and ultimately, find his way home to loving and grieving parents. The Canadian and Iceland scenery is visually stunning, breathtaking and memorable, making this a unique story that especially boys and dog lovers will enjoy.