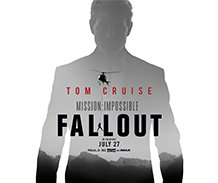 “Mission: Impossible – Fallout,” is the sixth installment of the action franchise where once again, Ethan Hunt agrees to his latest mission…his most action-packed and intense one yet!  Ethan (Tom Cruise) and his IMF team (Alec Baldwin, Simon Pegg, Ving Rhames) along with familiar faces (Rebecca Ferguson, Michelle Monaghan), are given 72 hours to find and destroy three nuclear cores that are on their way to a splinter cell of terrorists, who’ll use them to destroy the world. Henry Cavill, Angela Bassett, and Vanessa Kirby also star.

The PG-13 is mostly for intense action sequences, brief strong language and gun/knife and fighting violence. Best for mature pre-teens to adults. Cruise is incredible in a role he’s made famous over the years. Cavill (“Superman”) plays a handsome, tall and tough accomplice, who helps Cruise battle the bad guys. And of course, Pegg and Rhames tag along with witty lines and help carry out the plot twists. But it’s Cruise who has somehow defied aging and stands out among the leading men his age for not only famously doing his own stunts – but for proudly delivering a spectacular entertainment experience in every frame of his movie.  He not only drives a helicopter but hangs from one, he dangles off a cliff, skydives, races cars through Paris and London, jumps out of windows, and runs across the tops of buildings like a cheetah. “Mission: Impossible – Fallout” takes the audience on a unique thrill-ride filled with humor, breathtaking scenery, action-packed scenes, numerous plot twists and so much more…This is the BEST action movie of 2018!