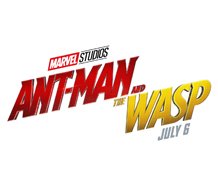 Holly on Hollywood
“Ant Man And The Wasp”
by Holly McClure

“Ant-man and the Wasp” takes place while Scott Lang (Paul Rudd) is on house arrest after helping the Avengers in Civil War and days from being released. He hasn’t heard from his former associates Hope van Dyne (Evangeline Lilly) and her father Hank Pym (Michael Douglas) since his arrest but has visions of Hank’s long-missing wife, Janet Van Dyne (Michelle Pfeiffer), who they believe to be alive somewhere in the Quantum Realm (which Scott visited briefly in Ant-Man). Complicating matters is a black market broker, Sonny Burch (Walton Goggins), whose rich clients want the technology Hank and Hope have created. But so does a former enemy of Hank’s, The Ghost (Hannah John-Kamen), who has limited time to find a cure for a painful disease she blames on Hank.  Laurence Fishburne also stars.

This PG-13 lighthearted sequel has plenty of laughs, lots of action, milder fight scenes, fascinating chase scenes, bolder visual storytelling and eye-popping effects. People are injured but there are no deaths. There is some unnecessary language (including a religious profanity) that is irritatingly placed in a family film. Like the original, this adventure is filled with humorous scenes of things (and people) changing from tiny to giant, lots of funny dialogue and creative CGI situations,  Rudd is funny and charming and has the audience rooting for the romantic tension between he and Hope. His partner Luis Michael Peña is hilarious in several funny scenes and delivers one of his signature loopy long stories. Overall there are lots of jokes and less death and destruction. It also promotes forgiveness, redemption, courage, and teamwork and it marks the first time a female superhero has been included in the title of a Marvel film. This sequel is a win and a welcome relief after the heartbreaking intensity of Infinity.