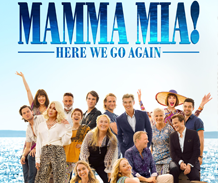 MAMMA MIA! HERE WE GO AGAIN is set about five years after the events of Mamma Mia!. Sophie (Amanda Seyfried) is planning the grand reopening of a bed-and-breakfast in Greece after the death of her mother, Donna (Meryl Streep).  Her husband Sky (Dominic Cooper) is in New York, considering a job offer. Half of the movie takes place in the present and half is set in 1979, when young Donna (Lily James) graduates from college and through a series of events meets the young Harry, Bill and Sam (Hugh Skinner, Josh Dylan, Jeremy Irvine) who become the future dad’s introduced in the first movie (Colin Firth, Stellan Skarsgard, and Pierce Brosnan). Cher and Andy Garcia also star.

The PG-13 romantic musical has mature themes concerning suggested brief sexual relationships with three different men in the same month (but it’s not shown), mild infrequent language, mature dialogue and issues (Sophie is mourning the unexpected death of her mother, Donna) which make it best for mature pre-teens to adults. There is some kissing, flirting, lots of dancing and lots of singing to ABBA songs. Lily James (“Cinderella”) lights up the screen and has a presence and beautiful voice, that makes this sequel worth it! And Cher is a delight, bringing a whole new meaning to the song “Fernando”. There are themes about friendship, following your dreams, falling in love, best friends supporting each other and motherhood. This is mainly a chick flick that is light on story, heavy on song and will leave you singing Abba songs.