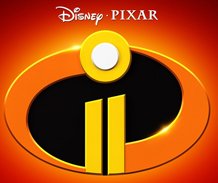 “Incredibles 2” – Our favorite family of Parr superheroes is back!  This time Helen (Holly Hunter) is asked to be the star superhero, leaving Bob (Craig T. Nelson) at home with Violet (Sarah Vowell) and Dash (Huck Milner) to be a super dad and hero for the kids, along with taking care of baby Jack-Jack, who appears to have numerous new superpowers. When a new villain hatches a plot to capture all of the Super Heroes, they call on their old friend Frozone (Samuel L. Jackson) for help. Also starring the voices of Bob Odenkirk, Brad Bird, Catherine Keener and John Ratzenberger.

The PG sequel is more intense than the original with more daring superhero action/violence, laser beams shooting out of a baby’s eyes, a couple of times when our heroes are in peril, a baby transforms into a mini monster, several scary fight scenes with villain that put kids and parents in danger. But there’s also lots of humor for kids and adults, as well as plenty of creative action sequences. The focus on family doing things together, as well as themes of courage, being true to who you are, being brave, giving kids a chance to help parents and allowing them to grow up, are some of the sweeter moments in the movie. I enjoyed the humorous dialogue for adults. However, I was surprised to hear language (hell, damned, oh my God) in a PG family-friendly, animated kids movie – very disappointing. The funniest thing to me was the fact that my audience was mostly 20 year olds to adults (clearly fans from 14 years ago), eager to see the sequel. I’m betting this is going to be a popular summer hit and pave the way for #3…hopefully we won’t have to wait another 14 years!