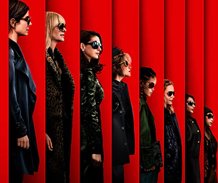 “Ocean’s 8” is an old fashioned heist flick, carrying on the tradition of Steven Soderbergh’s “Ocean’s” trilogy. It is crime as high art that takes place at The Met Gala, the annual fashion extravaganza at New York’s Metropolitan Museum of Art. Debbie Ocean (Sandra Bullock) is a con artist like her deceased brother, Danny (George Clooney’s character in the “Ocean” series). After serving five years for a fraud scheme, Debbie gets out of prison and immediately sets in motion her plan for the ultimate scam – to steal the Toussaint, a $150 million diamond necklace from Cartier worn by movie star Daphne Kluger (Anne Hathaway). She enlists the help of her best friend Lou (Cate Blanchett) and a group of ladies, each skilled in their trade: Helena Bonham Carter, Sarah Paulson, Mindy Kaling, Rihanna and Awkwafina. James Corden hilariously plays an insurance investigator.

The PG-13 is mainly for infrequent mild language, suspense, a couple of scenes where a character smokes pot and one scene that shows a woman in lingerie seducing a date, then handcuffing him to his bed so she can commit a crime in his home. Bullock is cooly charismatic and totally in command as she points out their crime is perfect because, “a him gets noticed and a her gets ignored” and wryly states, “Somewhere out there, there’s an eight-year-old girl dreaming of becoming a criminal. You’re doing this for her.” Beneath the couture gowns and glittering jewels, the high-tech equipment and old-fashioned sleight of hand, the message is about the power of women standing up for themselves, sticking with each other and making the impossible happen. The diverse cast of con artists are women of different cultural and socio-economic backgrounds who are loyal, brave, smart, funny, and honorable toward one another, although obviously morally questionable. Bullock and Blanchett have great chemistry but it’s Hathaway who has the funniest scenes and is clearly having a blast overplaying her character. I enjoyed the bling, stunning gowns and top designer wardrobes (Valentino, Dolce & Gabbana, Zac Posen). “Ocean’s 8” is exactly what it promises to be – an all-female classy caper, played by a cast of delightful actresses. This is a perfect summer popcorn movie worth getting a babysitter – unless your kids are old enough and cool enough to come along.