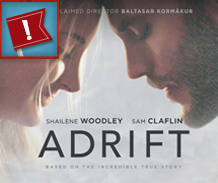 “Adrift” is based on the inspiring true story of Tami Oldham (Shailene Woodley) an American free spirit, who drifts around the world, taking odd jobs until she lands in Tahiti. It’s there that she meets Richard (Sam Claflin), a handsome Brit who is an accomplished sailor. The two fall in love, get engaged, then Richard is offered a job to sail a friends yacht to California. Along the way they encounter a catastrophic hurricane that damages the boat and leaves Richard injured and flat on his back. It’s up to Tami to do the hard work, finding the strength and determination to save herself and the only man she has ever loved.

The PG-13 drama for mature audiences is based on Tami Oldham Ashcraft’s book about her real-life love affair that began in paradise and turned into a watery nightmare. From the opening scene, the film cuts back and forth between the couple’s carefree tropical love affair filled with beauty and passion, and the nightmarish category-4 hurricane with terrifying, realistic, 40-foot CG swells and over 40 starving, tortuous days at sea. Woodley and Claflin have great chemistry but it’s Woodley’s brilliant, physical performance of sheer grit and survival determination, that carries the story, proving the human spirit and will to survive is a powerful intangible force. The fact that this is a true story makes the ending and photos of the real couple, even more impacting.