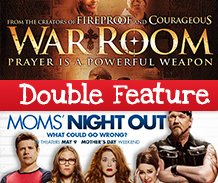 With Mother’s Day around the corner we thought we’d bring back two super inspiring movies! War Room will lift any mama up and remind her that she has a lot more control over her life than she might think ~ if only she’ll turn to Jesus! Mom’s Night Out is a hilarious story of some moms just needing a night out and everything that can go wrong does go wrong. Both of these movies will lift your spirits and remind you that you’re not alone! (Even if you sometimes feel that way…).