The PG-13 has lots of sci-fi action, ugly aliens and fight scenes, but… 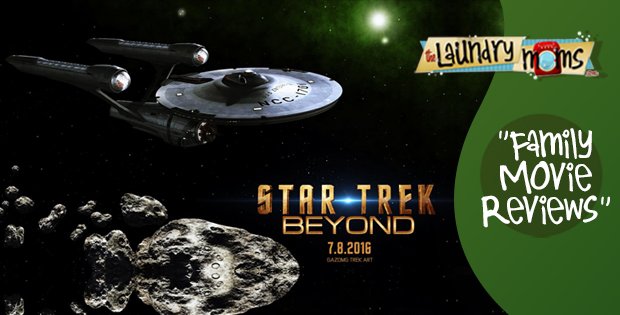 …nothing too graphic. I enjoyed the different parings of the crew, highlighting their personalities, witty dialogue and efforts to find and save their missing crew mates. I also enjoyed the tributes to Nimoy with the younger Spock mourning the death of the Senior Spock and seeing an old photo of the original Star Trek cast (William Shatner, Nimoy, James Doohan, Walter Koenig, DeForest Kelley, Nichelle Nichols and George Takei). In fact, the closing credits include a tribute to Leonard Nimoy and Anton Yelchin (who died tragically almost a month before the film’s release.)

This 13th Star Trek movie has a likable retro vibe with a plot that feels like you’re watching an extension of the series and themes about overcoming darkness, that deliver an enjoyable galactic adventure pre-teens to adults will enjoy!