Menu
Faith
Here’s the One Thing Holding You Back 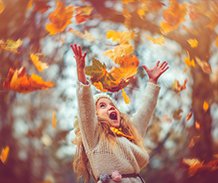 Here’s the One Thing Holding You Back
by Hannah Keeley

I remember when my two youngest girls were little. They were holding hands and spinning around in circles in the living room. Klara wanted to spin Kenna around so hard that she lifted off the ground. She could see it so clearly in her mind. She would hold Kenna’s hands, spin around, and she would just come off the ground and float around her. It just made sense to her.

After a while of trying over and over to spin Kenna off the ground, she finally took Kenna’s hands, began spinning, and said, “Okay, Kenna, now LET GO OF THE GROUND!”

Of course, Kenna kept on running around in circles, just as confused as her sister. Evidently, in this case, gravity won.

The problem lies in your imagination.

It’s time to LET GO OF THE GROUND. What are some things that are holding you back from flying? What is weighing you down in life? The only thing that is limiting you is right there between your ears—your mind. It’s what you believe to be true about yourself.

So often, we let such powerful words escape our lips, but fail to let them escape our limits. We’ll utter such powerful promises, like “With man it is impossible, but with God all things are possible” (Matthew 19:26) and then sink back into a comfort zone of self-imposed limitation.

Do you really believe that all things are possible with God? Or has that promise just become something to cheer about on Sunday morning and forget about when Monday comes around.

God’s Word is so powerful. But if we don’t combine it with our faith. It’s like shooting a gun, but aiming for nothing.

Consider for a moment about what you really believe is possible or impossible for you? God has told us that unless we have the faith of a little child, we can in no way enter the Kingdom of Heaven. Kingdom living means believing the unbelievable and accomplishing the impossible. Children believe they can do anything. And that’s the same belief you need to have for your life.

I truly believe the rest of your life can be the best of your life. But you need to mix your faith with God’s Word, let go of the ground, and learn to soar.

The world is waiting for you. You’ve got something it desperately needs. Let’s go!