You are probably already familiar with I Thessalonians 5:17, “pray without ceasing.” Well, I’ve been trying to do just that. In addition to having my prayer time in the morning, I try to just maintain a conversation with God throughout the entire day–sharing my joys, my sorrows, my praises, my requests. Basically, just bringing Him into every thought, word, and action.

This past week, I went to Walmart with one purpose in mind–find seven red plastic buckets.  For some reason, all my buckets went MISSING! I searched all over and could only find ONE red bucket. It was outside in the woods with a spider taking up residence inside. I went to one store, and could only find two red buckets. Oh, sure, there were ten blue ones and eight yellow ones, but only two red ones.

Then, as I walked into Walmart, I remembered that God cares about every little detail of my life. I whispered a prayer… 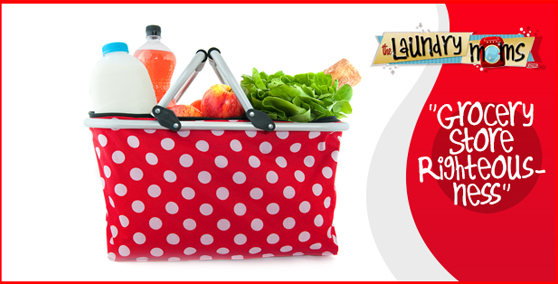 Then I picked up a few items and time got away from me (you know how it is with Walmart. You go in for a quick dash and end up lost in aisle 15 three hours later). I glanced at my watch and realized that Blair had to use the car to take the boys to church. I had to get out of there quick! I rushed to the checkout lanes and was shocked at how crowded it was. It seemed as if everyone in town had turned out to do their shopping! I got behind four shopping carts that were loaded down and settled in to wait my turn. I reached for my phone to call Blair and tell him I would probably be late, but then realized I had left my phone at home!

Then I remembered that God cares about everything. Again, I whispered, “God, if you see fit, I know you can get me out of here in a hurry. If you would, I would really appreciate it.” Immediately after I prayed, I felt a tap on my right shoulder. It was a Walmart employee. I turned to her and she said, “I can take you over here on aisle 18. I could hardly believe it! I followed her with my buggy, passing all the other shoppers on my way. The employee didn’t even turn on the light at her lane. She just started ringing me up. Wow! That’s just like my God!

I was feeling on top of the world as I walked out to my car. I loaded up my groceries (and my seven red plastic buckets) and pushed my cart into the stall. When I pushed it in, I noticed a disposable cup that I had left in it, along with a plastic spoon that fell out onto the parking lot. I turned to leave it and then God said to me, “Why should I bless you if you can’t turn around and bless others?” He was right (as always). Leaving that cup and spoon there, although it may seem unimportant for some, was a very important test. I immediately turned around, picked up the spoon and cup, and found a trashcan nearby where I could throw it away. God doesn’t joke around when it comes to righteousness.

Psalm 5:12 tells us, “For You, Lord, will bless the [uncompromisingly] righteous [him who is upright and in right standing with You]; as with a shield You will surround him with goodwill (pleasure and favor).” God wants to bless you, but it is your obligation to live a life without compromise. Leaving that trash there for someone else to pick up would be compromising. As children of God, we are to lift our standards higher, do a little more, go above and beyond to bless others. When we show that kind of righteousness, then we are opening up the gates of blessing for more to flow in. God wants to show you favor! Try living without compromise and see what happens.