God Wants You To Succeed 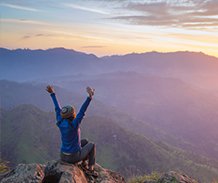 God Wants You To Succeed
by Meggan Larson

Say what?? It’s true but unfortunately there are SO many of His children who don’t get that truth. They’ve heard it, they’ve read it, in some instances they’ve been prayed over about it, but for whatever reason it’s just not sinking in. This is often the case for people who have been abandoned by a parent or been heavily rejected throughout their lives. Unfortunately I know quite a bit about this topic.

I was nearly aborted in the womb, I was given away for adoption (thank you Jesus!), rejected by my foster mother so I cried all day long for the first 3 months of my life, I suffered through constant rejection from one of my birth parents for nearly 20 years, and lived with a fairly cold and distant father for many many years. All of this led me to a false belief system that God loved His other kids more than me and that He would bless His other children with success in all areas of their lives but not in mine.

Rejection is such a difficult burden to bear. It can make you question everything you do, say, and think. It can cause you to hold back, stay silent when you should speak, keep the wrong kind of friends, and even sabotage your own success. This is not a burden we were ever meant to bear. The Lord’s yoke is easy and His burden is light (Matt 11:30) but until we receive breakthroughs in this area then we will continue to live under this false belief system thinking that we don’t deserve to succeed because at the end of the day we were rejected by those who were NEVER supposed to reject us.

There is one who has never rejected us though. He is our biggest cheerleader even if we don’t realize it. He cares about every little thing about us and genuinely WANTS us to succeed in ALL areas of our lives ~ even weight loss. Just because you have messed up before and keep messing up again, and again does not mean that He loves you any less. He’s not even annoyed with you! He’s furious with the enemy of our souls who continuously tries to trip us up at every corner, but He’s not mad at us.

When we come to Him with a repentant heart He literally forgets everything we’ve done and we have a clean slate. Not only that, but He is actually rooting for us to succeed! It took me 12 years to understand this truth and it took some serious ministry to get me there but the hope that has filled my spirit in the last few weeks has completely blown me away. I know that this is completely off topic from what I normally write about but I really feel that this word is for someone and if that someone is you then I want you to know this: Jesus loves you JUST as much as any of His other children and if you were the only person on earth He still would have died on the cross for you. He is not a man that He would lie and He doesn’t dangle carrots in front of us without us ever seeing it come to pass. He is a good, good father and I pray that this truth gets to the very core of who you are so that you can walk forward in freedom from this moment on.