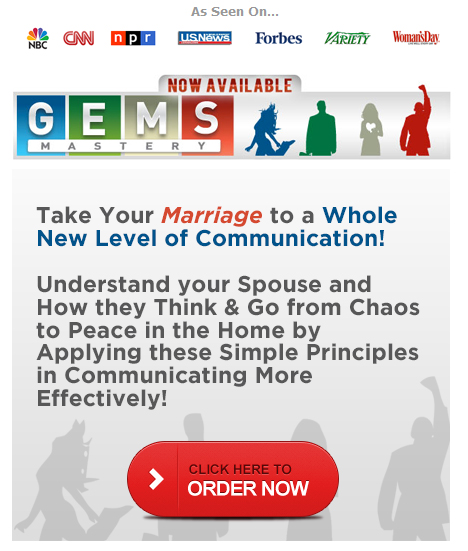 Here’s What Others Are Saying about the GEMS™ Mastery Program

“Learning how to identify other GEMS™ has been priceless. I’m a General Engineer in California, and it was always easy to talk to someone about construction, but when it came to sales I was seriously lacking and needed a lot of help. I even said SALES are not for me. After learning about different GEMS™ and what to expect from them, it has made communicating much easier. My closing rate has tripled. I paid off $42,000 of debt and I quadrupled my income.”

“My dad is an Emerald and I’m a Ruby, and we would fight constantly. And after learning GEMS™, I really started to understand why he was asking the questions that he was asking, what motivated him to ask me those questions and I could give him the answer that he was looking for. The communication has been smooth and it has really restored our whole relationship. It’s unbelievable where we came from and where we are now.”
~Mary Jo Kalasky

“I was taking copious notes at a recent event on each of the different GEMS™ strengths and weaknesses, I had a major life-altering awakening as to who I was really created to be. I had spent my whole life suppressing who I really was – it was easy to manipulate me into what people wanted me to be. Nothing I did ever felt right. GEMS™ has made me evaluate everything I do and why, the ways I think, and the ways I respond to situations. It has freed me up to accept who I am and am not. It has changed everything for me! What freedom!!”
~ Chad Ketcher

“Learning GEMS™ has helped me in my job as an Interpreter for the deaf and in my internet business. Being able to now recognize the GEMS™ has allowed me to avoid frustration and instantaneously remove the gaps and stumbling blocks in interpreting! This has allowed me to respond to the students with solutions instead of observing their frustrations of not understanding them and that has been an amazing skill that is priceless!!”
~ Anissa Bustos

“After learning GEMS™, I was actually able to motivate myself to succeed to become a top producer in my company! Beyond that, I’m able to teach and motivate others to succeed and produce results as well in my company.”

“Raised in an atmosphere where everything I did was condemned helped drive me to being manic depressive and suicidal (for 25 years). When I first heard the GEMS™ teaching, I wept for days (literally) just because somebody told me for the first time that I was OK being wired as the Ruby that I am. Now it is a huge part of our lives to study GEMS™, and not only accept but encourage people to be who they were wired to be! I am full of joy, 85 lbs lighter, paid off $276,482 of debt and have increased my income. I can’t even begin to tell you all of the changes and testimonies!”
~Jeremie Webb

“I’m a mom with seven kids, so I have a lot of personalities in my home. The GEMS™ training has helped me so much in understanding my children, what motivates them, what makes them happy and what makes them who they are.”
~Kali Gillespie

“I had no idea how to communicate with my daughter and we were constantly bumping heads. But since I’ve learned to speak to her personality, we are doing much better. We have learned how to communicate with each other. I had to stop speaking like I was talking to myself, and I had to learn how to speak to the personality that I was talking to. I have also been able to pay off more than $32,000 of debt in 7 months. It has helped us in our family life and relationships; it has also helped our income grow. You have to get plugged into GEMS™ because your income status will change, your emotional status will change, and your life will change.”
~ Annette Johnson

“Using GEMS™ has been amazing!!! I find it so much easier to communicate with people. I’m able to understand people and better motivate them in my workplace. I’ve also been able to pay off $2,000 of debt in 6 months and double my income. GEMS™ works. I highly recommend this system to everyone.”
~ Justin Edge