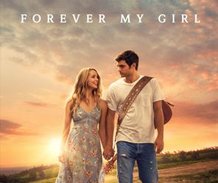 Holly on Hollywood
“Forever My Girl”
by Holly McClure

“Forever My Girl” tells the story of country music super-star Liam Page (Alex Roe) who chose a life of fame and fortune, after leaving his bride Josie (Jessica Rothe), at the altar. Eight years later, he unexpectedly returns home for the funeral of his best friend, and is suddenly faced with consequences when he sees Josie and learns they have a daughter named Billy (Abby Ruder Forson). John Benjamin Hickey and Travis Tritt also stars.

This is a perfect PG romantic love story with something for everyone: outstanding original songs (“Don’t Water Down My Whiskey”, “Enough”, “Wings of an Angel”, and “Finally Home”), charismatic characters, a believable love story, redemptive themes and an loveable little girl who steals the movie! English actor Roe gives a brilliant performance as the prodigal southern country singer with an amazing voice who is lost in who he has become – Rothe plays a strong single mom who still loves the man who jilted her – Forson is beyond her years and adorably cute – and Hickey plays the Pastor/father who starts the healing process for all, by forgiving his own son. This is a story about the power of love, family, community, second chances and coming home. There are many themes people will relate too but ultimately, it’s about finding your way back to your true self. I applaud the producers for making a PG rated romance all ages can enjoy!