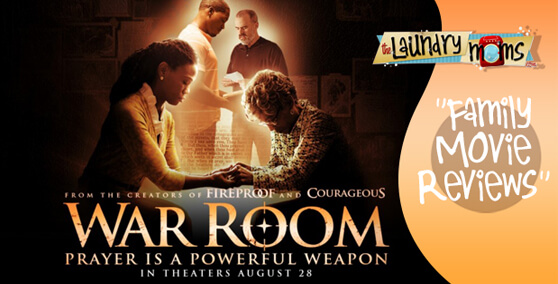 “War Room” is the 5th film from the Christian filmmaking team of Alex and Stephen Kendrick. The story centers on Elizabeth (Priscilla Shirer), a real estate agent whose marriage and family, is falling apart. When Elizabeth lists the home of Miss Clara (Karen Abercrombie), she immediately becomes friends with the Godly woman who teaches her about the power of prayer. T.C. Stallings gives an impressive performance as the wayward husband and Michael Jr., Beth Moore and Alex Kendrick, also star.

The PG drama is more for mature pre-teens to adults, who can understand the adult situations and issues. Alena Pitts gives an impressive performance as the young daughter who has to emotionally navigate her parent’s troubled marriage, while dealing with her own insecurities.

This is an important story on many levels. It not only shows the power that prayer can have on marriages, parenting, careers, friendships – all areas of our lives, but it will inspire you to immediately improve on your own prayer life! All audiences will relate to this movie and identify with the struggles these characters face. I laughed, shed a few tears, and in the end, was spiritually rallied by Miss Clara’s battle cry for prayer.

After seeing the “War Room”, I have a renewed passion for prayer and am reminded that, when facing life’s battles, God has already equipped us with His best weapon!