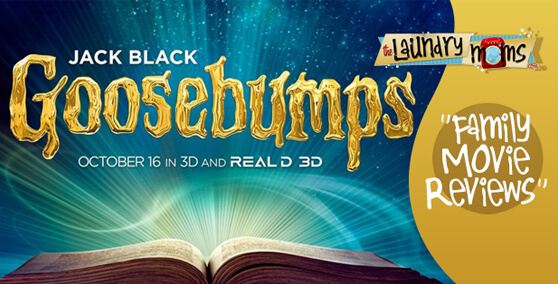 “Goosebumps” stars Jack Black as real-life author R. L. Stine who doesn’t approve of his new neighbor Zach (Dylan Minnette) who continually flirts with his daughter Hannah (Odeya Rush). One night Zach looks out his window and witnesses an argument between Stine and Hannah. Concerned for her safety, Zach grabs his friend Champ (Ryan Lee), sneaks into the Stine house and accidentally unleashes a stampede of threatening monsters like; the Abominable Snowman, a maniacal ventriloquist’s dummy Slappy, a werewolf, man-eating plants, zombies, aliens and others.

The PG rating is for kids 8 to adults because of intense chase scenes and scary looking CGI creatures that reminded me of “Jumanji”. There are 160 books in Stine’s popular series so the movie features about 25 monsters and a cameo of the writer himself. My favorite scenes were with the Abominable Snowman in a hockey rink, a herd of angry lawn gnomes in a kitchen fight and a joy ride on a Ferris wheel rolling down a hill.

I enjoyed this kid-friendly approach to a movie based on popular books that they love to read, where no one’s in real danger, the monsters are never too scary and there are a few fun goosebumps moments. Themes about bullying, friendships and parenting make it a family film all ages will enjoy.