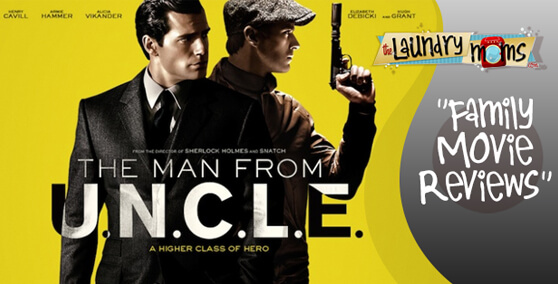 “The Man From U.N.C.L.E.” is set in the early 1960’s at the height of the cold war and is centered around CIA agent Solo (Henry Cavill) and KGB agent Kuryakin (Armie Hammer), who team up with Alicia Vikander to stop an international crime organization and prevent a worldwide nuclear disaster. Hugh Grant also stars.

When I was a kid, the Man from Uncle was an exciting TV show that made spies look cool and the name U.N.C.L.E. a household name. The remake is an elegant, fun and uber-stylish attempt at saluting the TV show, by delivering the look and feel of the 60’s with a modern twist. There’s lots of action, bad guys, witty dialogue and dry humor, that never lets the audience get too serious about the plot. Cavill and Hammer have great chemistry and make the movie fun to watch.

The PG-13 is for mature pre-teens to adults because of spy violence, some suggestive adult content and skimpy clothing with brief partial nudity. This Man from U.N.C.L.E. is a great popcorn movie that’s pure entertainment but more for adults than kids!