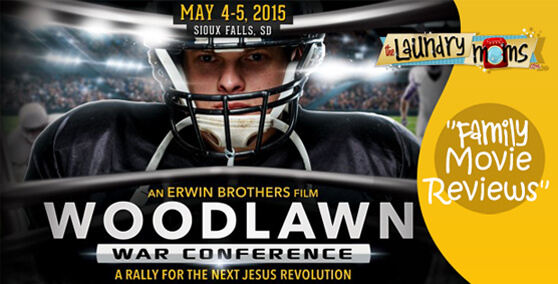 “Woodlawn” is a sports movie about the largest high school football game ever played in the racially charged city of Birmingham, Alabama in 1973 and the rise of its first African American superstar Tony Nathan (Caleb Castille), who went on to play for Bear Bryant and eventually, the NFL. But this family-friendly story is really about a spiritual awakening that was spawned by an on-fire-for-the-Lord chaplain (Sean Astin), who asked to speak to Coach Tandy Gerelds (Nic Bishop) football team and ended up winning the hearts of nearly every player to the Lord and eventually, the coach as well.  C. Thomas Howell plays a rival coach who’s a jerk to everyone until he too goes through a transformation of faith. And Jon Voight plays the lovable and determined Alabama coach, Bear Bryant. Kevin Downes, Devon Franklin, Sherri Shepperd and Kevin Sizemore all give great performances!

The PG rating is for themes of racial tension with footage showing fighting, comments about segregation and a scene where a black player is told he can shower when the “whites are finished”. Mature themes make it best for mature pre-teens to adults.

I remember when the “Jesus Movement” swept across America. Some were called “Jesus People” or “Jesus Freaks” and it birthed an exciting new spiritual culture in our nation. “Woodlawn” reflects that time, with an inspiring true story of perseverance, equality and a different kind of faith. With “John 14:6: One hope. One Truth. One Way.” on the poster, this is clearly a faith-based film from the folks who produce them for Christian audiences. But hopefully, the football driven “Woodlawn”, will reach a new audience, inviting them to simply believe – then see what God will do!