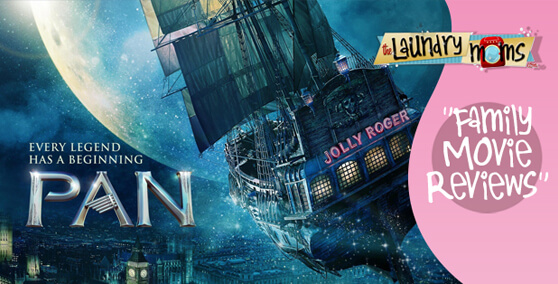 “Pan” stars Levi Miller as Peter, a 12-year-old orphan who’s taken from a wicked orphanage to the magical world of Neverland.  Amid “Never-birds” (skeletal dinosaurs), mermaids and fairies, Peter becomes friends with Hook (Garrett Hedlund), who’s a good guy, Tiger Lily (Rooney Mara) and of course Tinker Bell, who help him fight off the villainous pirate Blackbeard (Hugh Jackman).  Peter’s quest is to discover his destiny and fulfill a prophecy to become Peter Pan!

This PG fantasy adventure has intense action, mild language, chase scenes, gunfire that turns victims into clouds of brightly-colored smoke and scary giant birds. The prequel is loosely based on the beloved J.M. Barrie characters, only this version doesn’t have the warm fuzzy feel of “Hook”. This “Pan” is fast paced with a subtle “savior theme”, about the destiny of a gifted child born of a fairy prince and a human girl named Mary.

The special f/x extravaganza is luscious with bright colors, wild sets, exotic locations, an animated “memory tree”, colorful costumes, a modern score that includes a Nirvana song and a talented cast like Jackman and Mara, who bring a modern 21st century look to their characters.  “Pan” is visual energy that kids will enjoy and relate to, more than adults…and that’s the real message of Peter Pan!